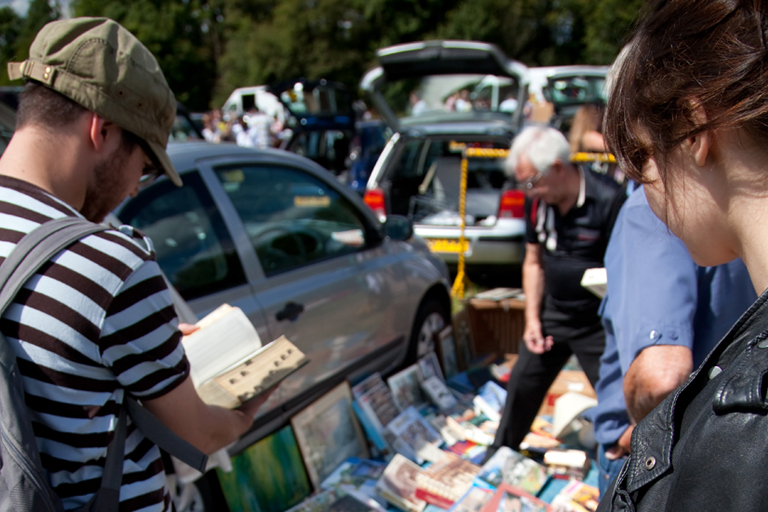 Selling your second-hand treasures may now be the domain of eBay, Gumtree or even Amazon, but there's something about the face-to-face nature of re-marketing your wares in a car boot sale that can't be beaten, not least because you can haggle for a better deal, or at least make people seem like they're getting one themselves.

But say you're a car boot rookie – where do you start, aside from getting a car, at least? Here, we focus on the basics, throwing in a few top tips here and there to make you a boot sale virtuoso by the end of your first day.

This one's probably the easiest one to answer, but it's still worth ensuring that everything is "car boot friendly" – in that you're not asking for mega millions for specific items. Look to things you'll part ways with for coins, not notes. Scour places other than your wardrobe and shelves, too – your loft, under-stairs cupboard, spare bedroom, whatever – places that will likely benefit from decluttering.

Anything worth plenty more than a handful of change is still probably best putting on eBay to get it out to a wider market of viewers, but it's still worth looking at how much a high-ticket item's worth on the internet and taking it along to your sale if you do have space. You never know, you might just find the money you could get from a buyer who's very appreciative.

This sounds like a bit of a weird thing to do, but by not putting values on your sales pieces, you're putting the value in the hands of others. It gives you more control; if you've done your research beforehand to find that something is, say, £30 new, you can use that against someone offering you a cheeky £1 for the privilege of giving it a new home. If someone offers more than you wanted, well, quids in.

Think about it – if you've got a vinyl you've researched as being worth around £2, but you didn't realise it was a rare press, you could be sabotaging yourself. And of course, some people simply want something so much that they'll part ways with cash just to get it.

You should always have a bottom line, unless you really are getting rid of junk you don't care so much for. As we've recommended above, it's very much worth researching costs online to see what you can get on auction sites, but remember that it's still a car boot sale; if you don't want to part ways for less than £30 and it's not electronic, chances are it's worth selling elsewhere.

Finding a place to sell

There are a few ways you can find car boot-friendly fields for your former desirables:

Pack everything up the night before

Everyone knows that the early bird catches the worm – if the early bird's a shopper and the worms are in the boot of your car, but obviously not actual worms, just your assorted trinkets – so make sure you've boxed everything up into relevant groupings before your big day.

It's not just a case of taking a load of stuff you want to sell – remember, you're playing shopkeeper. Make sure you've got plenty of loose change – in a sorting tray if possible – so you've got enough in the way of gold, silver and copper coins, alongside smaller notes. If you're running low on change, there'll be plenty of other people around with whom you can make an exchange.

Also, if you have a camping table of sorts – available at all good outdoor stockists for a pretty cheap price – you can display your wares as well as in the boot itself. Bring all those bags for life you've acquired since the 5p bag charge came in – a law that somehow managed to maintain the vast number of bags in your possession, but upgraded their quality – so people can carry away anything they may claim to be "too bulky".

Considering any electronic objects, bring spare, cheap batteries you can use to demonstrate that something isn't broken. You can probably pop 50p on for people to take home a couple of AAs you bought at ten for £1, too. Last, but not least, a pen and paper is essential for keeping on top of what you sold, and for how much.

No-one wants to reduce their once-favourite jumper because it's water damaged, so don't forget to check the weather before you go. It's Britain, so assume it's going to rain regardless of forecast and pack smartly. Your boot lid (if you have a hatchback) should provide some respite. Consider clear plastic sheeting for people to see through at the goodies you have on offer. If a friend has a summer gazebo, why not ask if you can borrow it?

Unlike the British weather, the British disposition is much sunnier and friendlier, and you really ought to keep this in mind when bartering for costs. Buyers like nice people with a good personality, and it's this that will get you an extra few pennies if you politely tell them that you couldn't possibly part with the dolphin statue for £2, no, your grandma was very fond of dolphins and her lasting memory is worth at least a fiver.

When you're getting to the end of your shift (or tether), look at what you have left and see if you can make a deal – either via a blanket reduction, or through desperate cries to others that you'll consider any offer. It's worth checking to see if there's anything you can save for a better day, but keep them in the public eye in your boot, for example, so people can enquire if need be. Consider buy one, get one free deals. Everyone loves BOGOF.

With these tips, you're well on your way to car boot heaven. Whatever you do, avoid watching Bargain Hunt for a couple of weeks – the last thing you want is to find out you've sold a knackered old clock that happened to be a long-lost Rene Lalique masterpiece worth £10,000.